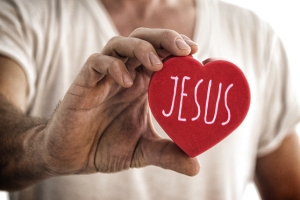 Throughout the course of my childhood and teenage years I “asked Jesus into my heart” probably at least a thousand times. I know that may seem outrageous to you and, believe me, I desired more than anything for my soul to experience peace and rest in Christ. Instead, however, I lived with a terrible fear that I would one day die and go to hell. Over and over again I had prayed the “sinner’s prayer” as I lay awake in bed each night, but had my prayer ever really been sincere? That question haunted me and choked out my spiritual growth for many years.

As a child I was taught that in order to become a Christian, you simply needed to “ask Jesus into your heart.” If you prayed a specific prayer and meant it in your heart at the time you said it, you were saved, which meant when you died you would spend eternity with God in heaven. Sunday school classes would end with the teacher asking his students to bow their heads and close their eyes. He would then ask anyone who did not know Jesus as Savior to raise their hands and, many times, would tell those people to repeat a prayer line-by-line after him in order to be saved. Youth gatherings and church services ended much in the same way. In addition, I sat under the teachings of many traveling evangelists who would essentially scare the entire congregation into reciting a certain “prayer of salvation” for fear of spending eternity in hell. I remember one specific youth camp I attended where the evangelist sent the crowd into a panic and cleared out nearly every pew in the church; people were kneeling at the altars and in the aisles with tear-filled eyes, trying to gain assurance that they were truly saved – even camp counselors who were faithful saints that had been walking with the Lord for years! Now, please don’t get me wrong, while only God can judge the thoughts and intentions of the heart, looking back it truly seems that these teachers, preachers, and evangelists had good intentions and were simply carrying out what they had been taught to do. After all, the “sinner’s prayer” is considered to be the “norm” in church-life today. But just because something is normal or traditional doesn’t make it biblical. It is certainly true that God can use these prayer recitations and scare tactics as a means to prick a lost heart, but more times than not these good intentions only produce false converts who are persuaded that breathing a simple prayer is all they’ll ever need to do to gain eternal security.

For me, that type of teaching generated a life lived in fear and uncertainty. For years I would consistently question myself: Did I really mean that prayer when I said it back then? I would regularly think back to the time and place I had prayed that prayer and would try to reimagine the exact feeling I felt at that moment. Yes, my prayer was definitely genuine, I would sometimes decide, while other times I questioned my sincerity and wondered if I truly knew Jesus as my Savior. At that point I would think, Well, maybe I didn’t mean it back then, but I’ll pray it again right now and I’ll really mean it this time. This battle ensued for years and years as I constantly questioned my salvation, wondering if on the day I died and stood before God Almighty He’d say, “I’m sorry, Kristen, but that prayer you prayed a thousand times was never sincere. I never knew you; depart from me.”

Then one day God revealed a beautiful truth to me. I was sitting in a church service, and the preacher was giving the invitation at the end of his sermon. “It doesn’t matter when you were saved,” he said. “All that matters is that you’re trusting in Christ now.” Once again, doubt sprung up within me. Well yes, I’m trusting in Him now, but how can I know I’ll still be trusting in him five years from now? Do I really have that kind of faith in myself? Can I really trust in my fickle, wandering heart that much to think that I’ll still be believing in Him in the future? You see, the problem was that I had been trusting in my prayer and not in my Lord. I was attempting to put all my confidence in a moment instead of in the Eternal God. And ultimately, I was hoping in my faith instead of in my Creator. At that moment it was as though God removed the scales from my eyes: Salvation did not involve me holding on to God. No, it was all about God holding on to me (John 10:27-29, Psalm 139:5). I cannot and will not trust in myself for eternal security. I cannot trust in a prayer or a feeling. God never said we would always feel saved. What He did say is that we must “run with endurance the race that is set before us, looking to Jesus, the founder and perfecter of our faith” (Hebrews 12:1b-2a). No, I can’t trust in a prayer; I can only trust in God and press on, abiding in His unending grace.

Interestingly enough, the “sinner’s prayer,” as we know it today, didn’t come about until the 19th century, and the phrase “ask Jesus into your heart” wasn’t commonly used until the 1970s. Once I really dug in and began to see what God’s Word actually said about conversion I discovered that the Christian life does involve praying to God, of course, but that there’s no specific words anyone needs to pray in order to be saved. In fact, it is God Himself who brings our dead, hardened hearts to life and causes us to cry out to Him in faith! Ezekiel 36:26-27 says, “And I will give you a new heart, and a new spirit I will put within you. And I will remove the heart of stone from your flesh and give you a heart of flesh. And I will put my spirit within you, and cause you to walk in my statutes and be careful to obey my rules.” It is only after God has raised our lifeless souls from the dead that we are able to call out to Him in faith and repentance (Ephesians 2).

The title of this blog post is attributed to a wonderful book I read by J.D. Greear entitled Stop Asking Jesus Into Your Heart: How to Know For Sure You are Saved. In it he says:

“Salvation is not a prayer you pray in a one-time ceremony and then move on from; salvation is a posture of repentance and faith that you begin in a moment and maintain for the rest of your life.”

Salvation does involve prayer, but it’s so much more than that – it’s a posture of the heart. In Luke 18, the tax collector cried out with a broken and contrite heart, “God, be merciful to me, a sinner!” His words aren’t what saved him; it was the posture of his heart.

There are countless people all over the world who are convinced they are going to heaven one day because they recited a prayer line-by-line after a preacher ten or twenty years ago. Unfortunately, however, so many times these same people soon prove that their hearts were, in fact, never changed, as they quickly abandon a life of faith and return to a life completely contradictory to what God’s Word tells us Christians will look like (Matthew 13:1-9). If not for God’s marvelous grace, my soul, too, would be at enmity with God. I’m so thankful for the freedom and security I have in Christ, not because of a prayer I prayed, but because of His shed blood and the salvation He freely offers to all who believe. My heart has been made new in Christ, and for that I will praise Him.

“I fall asleep quietly confident that I will be a believer in the morning not because of my free will but God’s free grace.”
~John Piper