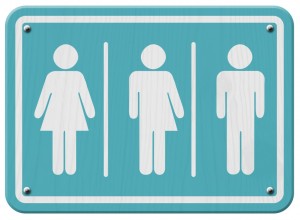 As most of you know, on Friday May 13, 2016, the U.S. Department of Justice Civil Rights Division, in conjunction with the U.S. Department of Education Office for Civil Rights, sent out a guidance letter regarding Transgender Students to schools across the country that receive Federal funds. The letter stated, “As a condition of receiving Federal funds, a school agrees that it will not exclude, separate, deny benefits to, or otherwise treat differently on the basis of sex any person in its educational programs or activities unless expressly authorized to do so under Title IX or its implementing regulations.” But the truly controversial issue comes in the next two sentences as the letter defines sex: “The Departments treat a student’s gender identity as the student’s sex for purposes of Title IX and its implementing regulations. This means that a school must not treat a transgender student differently from the way it treats other students of the same gender identity.”

Now, if you ponder this idea more closely it is actually easy from a worldly standpoint to follow this logic. On the one hand you have the body, and then on the other hand you have the mind. If the two are separated then it is possible for the body and the mind to disagree. Specifically, in the case of the current transgender movement, the body can be wrong while the mind is right. The body might look male, but the mind identifies as female. Therefore, the logical conclusion is to accept whatever the mind conveys and to live as the gender with which the mind identifies. For some, this includes using the facilities (bathroom, locker room, etc.) that are consistent with the mind. For others, this includes dressing in a manner that is consistent with the gender with which one identifies. And for a very small percentage of people, this even means hormone replacement therapy or gender reassignment surgery.

But doesn’t this action violate our cultural mantra that says one is simply “born this way”? Many in our day will say something along the lines of, “I’m born this way, so accept me for who I am.” So my question is this: Which is it? Are you “born this way” in regards to your body or in regards to your mind? I realize this is not a simple issue, but I don’t think any route that involves mutilation of the body is ever the correct path. Taking hormonal drugs or undergoing medical procedures does not change us at the core. We are who we are because God has created us in a specific way. Every single one of us is created in the image and likeness of God (Genesis 1:26-27); therefore, as image-bearers of God Almighty, every person is worthy of dignity and respect. This implies that we must honor one another, even those struggling with issues that we know very little about, such as gender identity. This also indicates that we should treat our own selves, our own bodies, with dignity and respect.

In addition, why is it that Christians are so disgusted and angry with those who believe their gender identity differs from the one they were given at birth? Why are we acting out of fear rather than out of love, power, and self-control (2 Timothy 1:7)? I know and understand that we must live wisely and we must protect the helpless, but is that our real concern and motivation in this situation? For some Christians, our only argument is centered around a man having access to a women’s bathroom in order to rape and molest our daughters. Is that not an argument created by fear?

I will acknowledge that there is reason for concern, but when we think this argument is a no-brainer and that it should solve the issue, we fail to recognize the greater reality. The greater reality is that there are real men, women, boys, and girls who are struggling with gender dysphoria, and all the while, we are blinded by this idea of a pervert in the restroom; this “straw man” that we have created in our minds.

Why are our hearts not breaking when we see others struggling with gender and sexuality? Yes, we disagree, but why do we think that we are so much better than “them”? Why have Christians created an “us” versus “them” mentality over issues where we disagree? We tend to be extremely short-sighted (I know I am). We tend to focus upon “them” and “their” sin and to miss the 2×4 sticking out of our own eye – the great sin from which God saved us! Ephesians 2:1-5 reads, “And you were dead in the trespasses and sins in which you once walked, following the course of this world, following the prince of the power of the air, the spirit that is now at work in the sons of disobedience – among whom we all once lived in the passions of our flesh, carrying out the desires of the body and the mind, and were by nature children of wrath, like the rest of mankind. But God, being rich in mercy, because of the great love with which he loved us, even when we were dead in our trespasses, made us alive together with Christ – by grace you have been saved…” If not for the grace of God, our wretched souls would still be dead in our own sin and filth! We have no reason to have even an ounce of self-righteousness.

Instead of crying out in disgust, let us look at the greater reality here: When God created man, He created us male and female (Genesis 1:26-27). God did not make a mistake when He created us, so let us help one another embrace the gifts of life and gender that God has bestowed upon us. Let us not define gender with our unfair, too tightly boxed-in stereotypes. Let us define gender as God has given it to us. He has created us male and female for our good and for His glory.

If you’re interested in further study regarding gender, check out Designed for Joy, edited by Jonathan Parnell and Owen Strachan.